Time for another Let's Play with me and Gabriel, in this case, 1989's Future Wars, an early game by Delphine Software (of Another World and Flashback fame) that they probably hoped everyone would have forgotten about by now. Here is a quote from our commentary: "Why, that's the biggest another monkey's butt I've ever seen". Why not try to guess what the context for that was, then watch the video and see how close you were?


So there's that. Also I thought I'd mention something that I've been banging on about at the end of Zero Punctuation for the last few weeks, and that's the planned Escapist Expo in September. 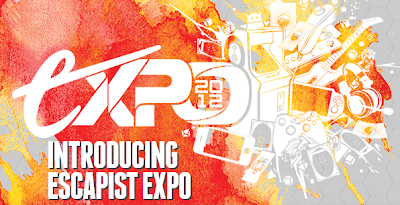 Yes, my colleagues are organising a game convention get-together fun times scenario type thing in the city of Durham, North Carolina, where the Escapist offices are based. I've been there once before after I did the GameX convention a while back but it'll be nice to see how massively it's changed since then. I'll be attending along with Graham and Paul from LRR and MovieBob and several other of my Escapist chums, so this presents American readers an ideal opportunity to hang out, get copies of Mogworld signed or perhaps murder me while I've been foolish enough to make my whereabouts publicly known for a brief period.

It's Let's Play time again with Gabriel's choice of game being Hugo 2: Whodunit, probably the most forgettable of an already pretty obscure adventure game trilogy. On this occasion I'm experimenting with just throwing up the whole video in one big lump to see if anyone really cares that much.