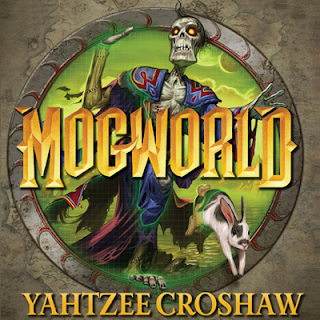 
Ho yes, this is actually a thing that is being done. Bet you thought I was hoping you'd forgotten about the promise of a Mogworld audiobook, right? That I'd been spending these quiet months sitting around in my pants eating Spotted Dick from the can? Oh ye of little faith. Actually it was Heinz Sticky Toffee Pudding. But importantly, there was a microphone set up next to my fat mouth and I recorded Mogworld between syrupy gulps.

It came to over 13 hours in length and about 1.4GB in total, it's fully unabridged and narrated by me, and let me tell you this: having to listen to thirteen hours of your own voice four or five times over for editing purposes has got to be someone's idea of an ironic Hell.

It's being published by the obliging chaps at Open Book Audio, and after a fairly lengthy approvals process it is now available on the big audiobook networks, meaning iTunes and Audible.com. But if you're one of those tiresome indie types it's also available on a few smaller networks. A full list of places that are selling it can be found on Mogworld's Open Book Audio page.

I'll answer the obvious question: no, I don't read it at Zero Punctuation speeds because that would be mental, and the audiobook format calls for a gentler, more relaxing approach than a hate-ridden 5 minute internet video. And incidentally un-learning how to talk fast was really hard and someone had better appreciate it.