So Mortal Kombat (the new one, the reboot that has the same name as the original in another example of that most infuriating practice) has apparently been refused classification in Australia. As everyone should be aware by now, Australia still lacks an R18+ certificate for games and anything that would require it is refused classification and effectively banned. In the past I have frequently expressed my disappointment at this extremely backward and counter-intuitive practice.

But as of now, I am officially done. I give up. You win, Australian censorship. This is the last thing I will ever write about the R18 issue.

Because it has become abundantly clear to me that discussing it, making official complaints and reasonably explaining the entirely logical reasons why the R18 is necessary and its absence makes Australia a worldwide laughing stock, is completely pointless. I and people like me have explained and campaigned until we're blue in the tits. A recent poll showed that the vast majority of the population are in favour of the R18 and the government flat-out recommended that it be introduced.

The reason why we still don't have it is because the final decision rests with the Attorney Generals, who have very clearly demonstrated that their decision is rooted in ignorant personal bias rather than the desires of the majority. In which case, what is the point of being reasonable to people who take pride in their stubborn, pig-ignorant wilful deafness?

But the other reason I'm not going to talk about it again is because it isn't my problem. It'd only be my problem if it in any way stopped games with adult themes being created, and it doesn't. If a game gets RC'ed I will just import it. This almost always works out cheaper anyway because of the insanely high markups games receive in this country.

The people who should have a problem, besides anyone concerned with Australia being perceived as a backward nation, is the parents. Don't misunderstand the issue, breeders: preventing an R18 certificate from being introduced is not preventing adult games from entering the country and corrupting your precious sexcrement. Rather, it encourages importing and pirating, resulting in the game entering the country unregulated and freely available to children of all ages. It also results in the Aliens Vs Predator scenario in which games that deserve R18 certs are given MA15 for the sake of a quiet life, despite being unequivocally adult games.

Yes, this is the same point that has been made time and time again and which will almost certainly be ignored by policy makers just as it always has been, but let me close my involvement in this issue with the main thrust of the argument as emphatic and capitalised as possible. R18 IS NEEDED TO REGULATE THE SALE OF ADULT GAMES AND PREVENT CHILDREN FROM PLAYING THEM. THE ADULT GAMES THAT ARE ALREADY HERE. NOT HAVING R18 DOES NOT PREVENT ADULT GAMES FROM ENTERING THE COUNTRY. OPPOSING R18 IS LIKE OPPOSING VAMPIRE HUNTING IN VAMPIRE LAND ON THE ASSUMPTION THAT IT WILL ENCOURAGE VAMPIRES TO INVADE VAMPIRE LAND EVEN THOUGH VAMPIRE LAND IS ALREADY FULL OF VAMPIRES.

Trivia night: tomorrow! (Tuesday 29th). It's got Bulletstorm prizes and the usual evening of larks. Come along from 6:30 as usual.
34 comments:

ZPs un-linked to thus far: Fable 3, Minecraft and A Shadow's Tale. I'd normally link to the XP columns too, but today I think I'll let you track them down yourselves as a fun little exercise.

Last trivia night went off without a hitch, so hopefully it'd be safe to assume this Tuesday's (the 8th) will go off similarly. So here's the poster. Yes, we actually were able to get someone to sponsor this one. 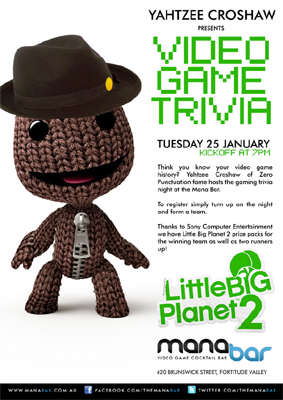