So I uploaded a Drown Out video to my Youtube channel, actually one we recorded ages ago that I've been sitting on for no particular reason, but then I thought, since it's New Year, why don't we do what my old middle school used to do, and bring in games?

So here's the deal: the video's unlisted and you need the link to view it. To determine the link, complete the puzzle below. Most of the clues are references to Let's Drown Out videos, or to games that Gabriel and I have done in our various LDOs, LPs and Ego Reviews. Don't spoil it! Let everyone else have the same amount of fun! 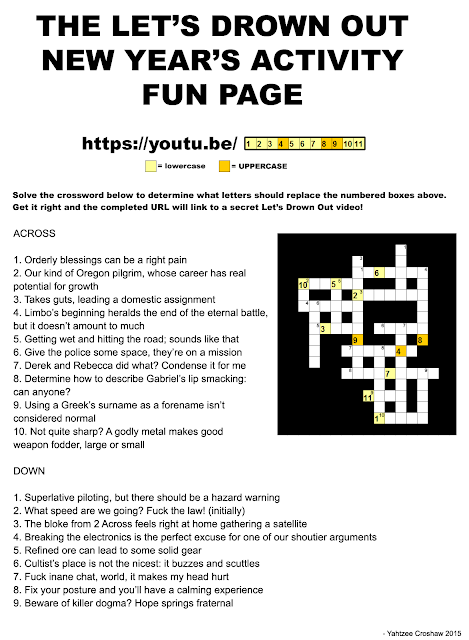 You know what makes a great gift idea for people you don't know particularly well or can't bear to be around in person? Steam games! And with the Steam holiday sale now on, there's no better time to reward the introverted urban hermit in your life. Might I humbly suggest getting them The Consuming Shadow, which is 50% off until the end of the sale. That's right, just $4.99 USD. The lucky recipient will think of you every time they fight off the urge to shoot themselves in the throat.
476 comments: 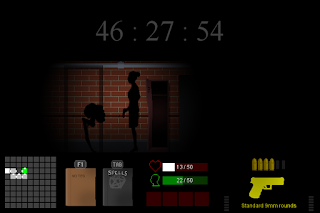 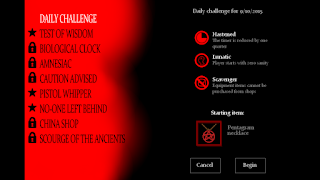 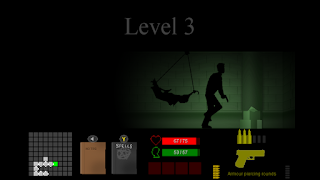 Humble Store buyers read this! As promised, those of you who bought the Humble Store version will receive a Steam Key in time for the release. You should automatically receive it, and will be able to get it from the same download page that was emailed to you when you bought it the first time. If you don't have it by Friday, get onto Humble Store about it; don't get onto me because I won't know.
342 comments:

Only a couple more days left to get the Consuming Shadow special bundle for the reduced price! In the meantime, we've released an updated version of the game that fixes a couple of major issues that have been reported by users. Thanks to everyone who took the time to let us know about them.

- Fixed game not deleting save files for some users. This was a rare one that might have been related to players using older or non-English language versions of Windows, in which the game was happy to write save files but not delete them, so whenever you tried to start a new game it'd load the end of the previous one. The game has been reprogrammed to overwrite saves rather than delete them, which should fix the issue.
- Fixed the crash caused by the 'northdoor' variable in dungeons. A lot of people have reported this one, it was caused by a specific random sanity effect trying to activate in a dungeon entrance. All fixed now.
- Fixed town jobs disappearing when a subsequent text message is ignored
- Fixed a rare crash on the encounter screen caused by 'rewitem' variable
- Fixed an error in which equipment quests would show the item being owned when it isn't
- Fixed saving hostages not being acknowledged in the end text of some dungeons
- Fixed being able to interrupt the final ritual by interacting with the rune cluster
- Fixed some typos

Please re-download the game from Humble Store to ensure you have the best possible experience with Consuming Shadow. The version on Mac App store will be updated soon as well.

Just to answer a couple of frequently asked questions, yes, we will be giving out Steam keys to anyone who buys the Humble Store version, when/if we get cleared by Steam Greenlight. And yes, we will be adding Steam achievements at that stage.

On that note, thanks to everyone who's been supporting the game on Steam Greenlight. And it's also been heartening to see the player-created support and resources appear quite unbidden by us, some of which I thought I'd boost a little here, since it's nice to have places to exchange knowledge.

The GoG wishlist page
Thanks to anubisgod6 for creating an entry for us on the GoG wishlist. If you'd like to see the game available on GoG, you know what to do.

The Consuming Shadow wiki
Could use a bit of fleshing out, this one
491 comments:

The Consuming Shadow is now available to buy from the Humble Store. Here's the official homepage for the game if you want the deets. Can you save mankind from the invading Ancient with just 60 hours, a gun, a notebook and an increasingly loose grip on your mental functioning?

Special offer! If you buy from Humble Store before August 7th, you can get the special bundle edition of the game, that comes with copies of my two ebooks (Mogworld and Jam) thrown in, for the same price as the solo edition - $9.99. After August 7th, the bundle will go up to 16.99, so better take advantage quick like.

Consuming Shadow by itself


Mac users! Don't think you're being left out! The Mac version of The Consuming Shadow is also available now on the Mac App Store!


Also, if you've got a moment, we've also got a Steam Greenlight page set up. Please show us support by voting us up so we can hopefully get a version of the game out on Steam!

Really psyched that I'm finally getting this project out there. But wait, while I've got your attention, I don't believe I've mentioned it in my blog yet but Hatfall, the Zero Punctuation game for browsers and tablets, came out a couple weeks back, and you can play it here right now. What's more, my new weekly video series, Judging by the Cover, is currently going out on Fridays at the Escapist. It's a wry look at the wonderful world of cover art, blurbs, and marketing imagery. Coh, what a busy time I'm having.
365 comments:

Alright, I suppose the phrase 'a few weeks' in my last post might have been a bit overoptimistic, but the good news is Hatfall is now through most of the complicated testing and porting stage and should be ready very soon. But that's not all! By weird coincidence rather a lot of my ongoing projects seem to be approaching their launch windows at more or less the same time. For example, there's also this:


Yes, The Consuming Shadow is finally coming to fruition. It's come quite a ways since the alpha: multiple playable characters to unlock, more monsters, more missions, controller support, a whole slew of design changes. It's my very first attempt at turning my solo game projects into a commercial release rather than a freeware one and should be coming to a digital distribution system near you soon.

And there's a third project of mine that will be launching soon. I won't give too much away now, let's just say that it starts with 'N' and ends with 'ew weekly video series'.
200 comments:

To Catch A Hat

So in my last entry I hinted at a little game design project I've been working on for the last couple of months (since around last Christmas, I think, 'cos I remember using my week off to prototype it up properly). And now the Escapist have announced it, so I can confirm that it's this. HATFALL, a game for browsers and tablets based on Zero Punctuation.

When the opportunity to make a ZP game came up, I blew it off at first. I couldn't immediately see how it could be done. But then, out of nowhere, an idea started to grow. ZP is based on a fast pace, minimalist style, and a stream-of-consciousness barrage of nonsense, and so the game should correspondingly be built around a fast, minimalist core gameplay, which I could then use as a platform for as much silliness as I could come up with. And then I realised that I'd thought about it too much and I had no choice but to make it. After all, ZP is my own personal stream of consciousness, I couldn't trust anyone else to recreate the same spirit.

It's going to be free to play and out sooner rather than later, so watch this space (and this one) for the next couple of weeks.
996 comments: