Well tickle my nuts, because Dark Horse Books has made the announcement that my second novel, JAM, will be released later this year. With slightly less of a video game focus than my work usually is, JAM is a dark comedy in which a small group of survivors is forced to deal with the one apocalypse no-one saw coming: an infinite, crimson doom that smells strongly of strawberries.

In other book news, the e-version of Mogworld is now available for the Nook and Kobo E-readers. Kindle is apparently still being sorted out, but is in the works. The audio book will also be in the works as soon as I pull my finger out and start recording it, which isn't easy when I seem to get a new round of tonsillitis every bloody month.
102 comments:

Here's all four parts of the Dreamweb LP. I released them on Youtube but I wanted to keep the Poacher 1.1 announcement at the top of the blog for a bit. Have you got all the achievements yet? What are you, some kind of Southern poof? 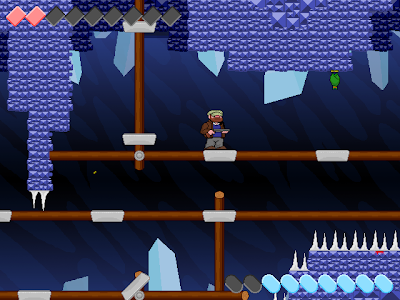 The updated version of Poacher, version 1.1, is now available! I was originally only going to fix the major bugs but the Escapist were away on Easter holiday for a few days and I figured I might as well use the time to put in some new features. So here's the updated download link (updated on the original post also). And if you need convincing, here's what's new:

- Bug fixes, including the crash caused by using grenades too quick, the right-screen-edge exploit someone helpfully demonstrated on Youtube (sorry if you were having fun with that one), an error that occurs when fighting Rebecca's phantom daddy in the Abyss with only three grenades, and a couple of other minor tweaks. I also made some tweaks to one particular bit in the Great Library that was widdling on a lot of pies. Speaking of making things easier, though:

- NEW FEATURE: Optional easy mode! Well, basically you have 5 health at the start, removing two health upgrades later in the game, so it's more like a 'get settled in mode'. But it does also increase the drop rate of pickups from dead enemies and hopefully that'll be enough. You know. If you're a wuss.

- NEW FEATURE: Customisable keyboard controls! You asked for it, you got it. I didn't want to have to put some big artful menu system for changing the controls, so I hit upon a pleasingly retro idea. There's now a text document in the game folder called controls.txt which the game reads the keyboard controls from, and it's designed so that you can edit it to put in whatever controls you please. But back up the original file before editing and follow the instructions carefully because the game is quite picky about formatting. No support for customising joystick/controller buttons at this point, though. Sorry.

- NEW FEATURE: Achievements! Love them or hate them, they at least give you something to do when you've 100%ed with the secret ending. There are 20 in total to collect and after one playthrough the ones you've yet to unlock will appear on the intro screen. Rest assured that there are no mandatory story achievements besides the ones for beating the game, 'cos too many games just give you an achievement for beating each chapter and I hate that shit.

IMPORTANT NOTE: Save games for the old version will NOT work with 1.1. This is unavoidable, I'm afraid, so you'll have to start the game over. Consider this the opportunity you need to shoot for the secret ending. Haven't found that, yet? Well, here's your hint: the secret ending will only appear for the pure of heart.

That download link again in case you missed it: Poacher version 1.1. Some security software apparently has been spreading ugly rumours about it being malware, but they just get uppity about installers that haven't had the thumbs up from the Man. You trust me, right?

If you're not interested in Poacher because you prefer Cooking Mama or games that will work on a Mac, then there's also a new Let's Play from me and Gabe coming soon. I'm going to go upload it now and edit this post when it's ready. Watch this space! 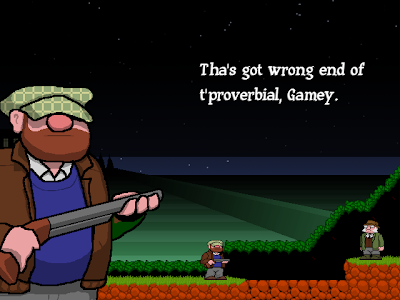 So my latest freeware game, Poacher, an unashamedly retro platformer starring stout Yorkshireman Derek Badger and his trusty shotgun, has been released. The download's being hosted by my good chums at the Escapist. Read the news post about it here or just click here to download the installer. Yes, it's an executable you have to download and install onto your PC, remember that? 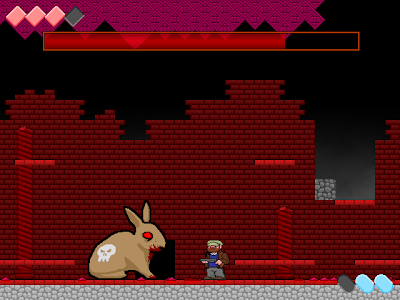 I'll have a proper page set up for it soon. Until then, feel free to give it a download and let me know what you think. This is the first Game Maker rather than AGS game I've released and perhaps the most overtly gameplay-focussed I've ever done (I've been trying to move more in that direction since Art of Theft), so I'll be interested to know what lessons I can learn. Also it's freeware, so if you hate it you can't demand your money back. Basically what I'm saying is 'aaah don't hit me'.
335 comments: