Hello everyone, I'm back from holidays. This may be a little confusing since I clearly stated in my review and column last week that I was on holiday next week. Well, it's not that hard to figure out: I do my videos and columns a week in advance, so I was on holiday at the time last week's stuff was released. There still won't be a video or column next week because at the time I should have been working on them I was lying on a sunbed becoming more red and covered in flaking-off skin than a zombie's used tampon.

Anyway, here are links to last week's stuff. First there's Tuesday's Extra Punctuation, which was about the word 'gamer':

"The point I'm trying to reach is that playing games, as entertaining and fascinating and beneficial as it might be, is just something people do, not something they should be defined by. People don't call themselves moviegoers, or TV watchers, or book readers. That's the job of marketing agencies."

And secondly ZP itself, this week Transformers: War For Cybertron.

Also, you may not have noticed but the Escapist were running in my absence a little competition over which ZP video is the best, perhaps (on an educated guess) to decide what they're going to show instead of a brand new ZP next week. Here's a link to it, because you can still vote to have a chance to win a signed copy of Mogworld! Phew!

Later I may post a fuller account of my trip with some photos I took. If you're very good.

This week's ZP is Split Second: Velocity, published by Disney Interactive Studios. I'd say more but I kind of have to fly to Melbourne. Like, now.
25 comments:

The great adventure of publishing

Some important news about Mogworld (my book coming soon buy it buy it): there's going to be a little postponement on the release date. Nothing to worry about, just some technical cock up at the printers apparently, so we're now looking at an on-sale date of September 8th. And presumably the Mana Bar signing event will be around then too. Update your diaries.

It's cool, the book's still good. At least, I presume so. Maybe the publishers are just telling me this to let me down gently because the book's actually crap. I've been out with girls who used the same tactic.

Anyway, this week's Extra Punctuation is on the subject of exploration as a gameplay mechanic, and continued tongue baths for Shadow of the Colossus. Here's the clip.

"I think the use of exploration for its own merits is something that's been neglected lately. I can think of a lot of open world sandbox games that seem to actively discourage it; the ones with dreary, repetitive environments, a minimap you will spend half the game staring at, and a live GPS system to hold your hand in case the freedom gets a little bit too scary. I'm thinking of you, Red Faction Guerrilla."
12 comments:

A quiz for me and a quiz for you

Today I've just got a few housekeeping things to sort out. I forgot to link to an interview Tom Francis did of me for PC Gamer, so I'm going to do that now. Here's a clip.

"PC Gamer: Some of your best gags are in the animations – do you do those after you’ve recorded the review? Do you ever make a point specifically for the fun of illustrating it?

Yahtzee: I generally write the script first, then do the images, then record the voice, because sometimes I’ll be making the images and realise a point can’t be easily visualised and I need to reword it a bit. Colourful analogies help. ‘This game controls bad’ doesn’t immediately throw up an image, but ‘this game handles like a stag on an icy lake with its antlers tied to two different windmills’ does."

Other topics include my occasional game development aspirations, my guilty pleasures, and inevitably another plug for my book. Check it out.

Closer to home, we're working on sorting out a signing event for Mogworld to take place at the Mana Bar. It's going to be an event where you can buy copies of the book and get them personally signed and it looks like it's going to take place some time around the end of August. The book's official release is still August 18th (although I hear some Amazon preorders missed the first printing and will have to wait a bit longer), but it may take some time for a stock to finally get to us, plus I'm going on a week's holiday next Saturday. Doing it a bit later might work out better, on reflection, 'cos it'll give people who ordered the book time to get their copies so they can bring them in for signing.

As for signing events elsewhere, none are currently planned. Give me a break, I don't have the kind of lifestyle where I can just drop everything and do an international tour. Maybe for the second book if the first one becomes, you know, global #1 bestseller and ensures I never have to work again. Mm.

Finally, in Mana Bar-related news, I'll be hosting Gaming Trivia Night there again this Tuesday from around 6:30, so feel free to drop in and register a team. Half gaming trivia, half general knowledge, but no half measures where prizes are concerned, I assure you that. Come on down and be a man, or woman, or whatever unnatural combination of the two you are.
11 comments:

Colossal in every sense

This week's ZP is a retro review because the release schedule is still a bit dried up. Late August is looking a little busy, though, with Mafia 2 and a number of other things. The pre-Christmas period gets here quicker every year, doesn't it. Anyway, enjoy Shadow of the Colossus. I command it.
24 comments:

It's Wednesday (or Tuesday, from certain, fatter perspectives), and that means it's time for Extra Punctuation. This week, in the aftermath of my Deathspank/Limbo double bill, I discuss the artistic renaissance of 2D platformers about small children with big heads.

"Now, when you're developing a game, an important part - some might say the very first part - is to figure out who, exactly, you're developing the game for, and factor that into your gameplay, story and difficulty level. Lucidity, a 2D platforming thing by LucasArts of all people, appeared to be targeting its gameplay at retro arcade players, its story at 70 year old grandmothers and its difficulty level at self-flagellators."

It also mentions Cave Story, which if you haven't played then you have no excuse for not currently downloading it as we speak. 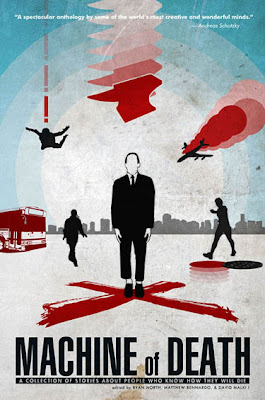 If you've got some pocket money left over after buying copies of Mogworld for all your friends, family and pets, then I highly recommend you pick up Machine of Death as well. It's got contributions from some of the freshest young talents on the internet. So God knows why they let me in it.
16 comments:

How can I make this clearer

Here, by popular and almost completely unspoken demand, is a follow-up to my Mogworld Q&A video I did last week. This one clarifies a few points people raised afterwards, such as whether there'll be signing events, whether the book will be available at street retailers, my true feelings about Terry Pratchett and exactly how much I ripped off a popular webcomic.

Just to clarify this clarification, no, Mogworld is almost completely unlike Looking For Group save sharing a source of inspiration. Just trust me on this one.
17 comments:

I resolved to make this blog a slightly more regular and definitive digest of my work, so to that, here's a link to today's Zero Punctuation, along with a funny image, above. Christ, I am taking this seriously. This week it was an XBLA double bill: Deathspank and Limbo. I hate this time of year.
48 comments:

Crafts of the starry variety

This week's Extra Punctuation article is up at the Escapist. It's related to Starcraft 2 because I thought I'd better respond on this issue fast. Main thrust of the gib as it were is that I completely don't care. Here's a sample:

"I'm not saying it's bad or an unnecessary sequel, although it could well be both of those things. I'm saying my opinion on StarCraft 2, or indeed any real time strategy game, is about as much use as Roger Ebert's opinion on gaming as a whole. Or Ug the caveman's opinion on the diesel engine. I don't play them. I've never been able to get into them. They're just not my cup of tea. Okay?"

Anyway from there I indulge a little train of thought to try to find the answer of how players of RTS and FPS could perhaps learn to live together in perfect harmony. Click here to read it.

Last night was trivia night at the Mana Bar, and I was surprised that we didn't get the usual massive turnout. Still packed, of course, but not all the way up to the walls like usual. It's probably because it's been three weeks since the last one rather than two and we lost a bit of the momentum. Still, if you've been discouraged by the crowds for these events thus far then you may be in with a better chance of getting in next time, on August 17th.

I heard a story that Guinness once decided to stop advertising. Everybody knew what Guinness was. Everyone who liked and regularly drunk Guinness wouldn't find out anything new about Guinness from TV spots and they were guaranteed sales as long as St. Patrick's Day existed. But you know what happened? Their sales plummeted. Very, very quickly. So next time you complain about adverts on TV or in the cinema or even on my online videos, remember that it wouldn't be necessary if you weren't all such flighty cunts.
32 comments: