Thanks to all the feedback that has come in on The Consuming Shadow so far. A couple of large issues came to light, so I've uploaded a 1.0.0.1 version that takes care of them. I won't make a habit of putting out new versions regularly; like I said, I plan to put out a much fuller version further down the line. This is only to handle some big issues that may spoil the enjoyment of the beta and get in the way of assessing the game as a whole.

Originally I only had mouse-controlled movement 'cos I like the idea of a single-button game. It's nice to have a hand free to drink with, and the possibility of a future tablet version has crossed my mind. But on reflection I didn't see any reason not to also have the option of keyboard controls if a keyboard is available.

So you can now use WASD or cursor keys to walk, holding down SHIFT to run, and the number keys 1-3 can be used to switch ammunition types. You can also press ESC to either flee the dungeon or to quit out of the Magic menu without casting a spell, which was another annoyance.

- Fixed the ladder disappearing in the endgame dungeon

- Clicking to dispel a message while your mouse is still over the bottom-centre button no longer presses the button again.
- The Pentagram Necklace is no longer overpowered

Instead of eliminating sanity loss from spellcasting, now it only halves it, so you can't just cast Mass Death and Restoration infinitely. (The effect stacks if you also have the Rosary equipped)

See, what happened here was that there's the raw Sanity stat and there's the Trip stat, which is the amount of sanity the drugs have added. Previously, casting magic only reduced the raw Sanity, but now if there's no raw Sanity left it takes away from Trip instead.

Cosmetic changes and other tweaks:

- Hunters now fade in when appearing in a new room, rather than popping into existence at the door

That's about it. Please download and install the newer version if you intend to keep playing and testing - save files and score data from the previous version should still work. I learned my lesson not to use Game Maker's built-in save function after Poacher.
99 comments:

I did threaten that I might be working on another game, and here it is. May I introduce you to The Consuming Shadow (Beta).

Those of you who remember my Chzo Mythos series of adventure games may appreciate that I'm coming back to Lovecraftian horror with this one, but this isn't a point-and-click adventure. I like to think of it as a 'Survival Horror Roguelike'.

The idea came to me almost exactly a year ago, during my Christmas break from ZP. I'd been playing a lot of FTL: Faster Than Light at the time, which is a game I quite enjoy. I like the sense of being a small thing up against massive odds, having to prepare yourself with the constant threat of your pursuer hanging over you. It occurred to me that that sort of gameplay would fit a Lovecraftian setting very well, and thus were the seeds planted for Consuming Shadow. I've been working on it pretty solidly since then.

You have 72 hours to travel from town to town, resolving randomly-generated dungeons in cursed towns and restocking supplies in safe ones, beset by random events and encounters all the way. Ultimately, you must find information on the Banishment Ritual, a sequence of four runes that must be incanted at a specific location to stop an evil ancient god from re-entering the world and slaughtering humanity.

But there's also a puzzle aspect. One of the four runes of the ritual will be the rune of the god you mean to banish. There are three gods exerting influence upon the world, but only one of those is attempting to invade. If you piece together the ritual but banish the wrong god, then you have failed at the final hurdle. You also need to gather enough clues as to the gods' identities to be able to make, at the very least, an educated guess.

In the grand tradition of Roguelikes, if you die, then everything will be lost: ammo, equipment, information, everything. You must go back to square one with everything re-randomized: the dungeons, the ritual, the invading god, and all the facts relating to the gods. However, with each death you are awarded XP based on how much progress you made, and each level you attain adds an upgrade you can apply at the start of each life. The game is intended to be obscure and challenging at first; you're not expected to pass it on your first attempt, but to use each life to learn a bit more about how things work and how to handle the minions of the shadow.

Finally, bear in mind that Consuming Shadow is very much a beta, and I'm looking to get feedback on it that can be applied to future, bigger versions. A full version would certainly have a wider range of random dungeons, monsters and events; as it stands it's probably going to repeat itself a fair bit. Other features I have in mind for a full version include collectible world-building documents, monster profiles, and different unlockable playable characters with different gameplay styles. Suggestions welcome.

With all that in mind, here's the page with the download link. Let me know how y'all go with it. Bonus points if you record yourself playing for Youtube, 'cos that's as good as a focus test.
178 comments:

That Most Talkative Jam

So you may have noticed I've done a bit of rearranging on the front page. Steer your eyeballs portside and you'll note there's a new link for the Jam audiobook. Basically that was the announcement. Hey! The audiobook version of my second novel, Jam, is now available from iTunes and Audible.com! A lot of people were asking about it and we got it out just in time for the holidays. It's my classic tale of an alternative apocalypse, fully unabridged and read by my good friend myself, published by Open Book Audio just like Mogworld was. Click the big image below if you consider the sidebar button beneath you. 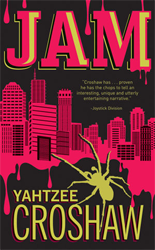 Also, here's a link to the Amazon page in case you're not interested in the audio version but were suddenly reminded that you need to pick up a Kindle or physical copy of Jam, and who could blame you.

I might as well also use this post to mention that I may have another announcement soon. I'm working on another game with Game Maker, and am thinking of putting out a beta version sooner rather than later to get some feedback, then using that feedback to make a larger, final version to try putting out for actual money. Ho yes, now that I'm a fully grown up and mature professional creative I'm starting to realise that perhaps I should endeavour to find some compensation for time frittered away on solo game projects. Watch this space.
74 comments:

Hello! I'm still alive! Here's a video Gabriel and I did in which we play Flashback very badly.