Existentially Challenged is now out! 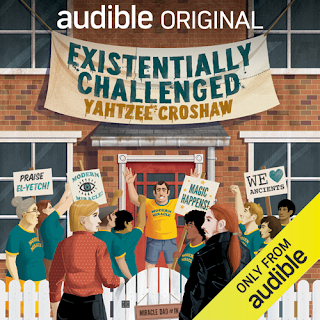 Existentially Challenged, the first sequel to Differently Morphous, is now available on Audible.com as an Audible Original! You should know the drill by now; it's an audiobook first, with Dark Horse publishing a print version some way down the line; probably late next year.
Existentially Challenged catches us up with the Department of Extradimensional Affairs, still struggling to set precedents in the new era that began when the British government declassified the existence of magic. One unexpected side effect has been that fake psychics and spirit healers are running amok, now that they have real magic to hide behind, and so a new law is passed to come down harshly on "magical appropriation" while Doctor Diablerie and Alison Arkin are reshuffled into a new "Office of Skepticism." Things soon go awry as an investigation into a faith healing cult goes to unexpected places, and meanwhile the internal tensions of the Department threaten to tear the returning cast apart along a brand new set of battle lines.
I'm pretty happy with how it turned out. It's really setting the tone for what I want the DEDA Files to be (that's the official name now) - an ongoing mystery-of-the-week series with a big underlying intrigue that may bubble up to the surface at any time. Although having said that, the next book I want to write is the third and final novel of the Jacques McKeown trilogy.
Oh yes, and I am fully aware that the Jam and Mogworld audiobooks have disappeared from online stores, that was due to the original publisher going down, so I'm waiting to hear back from Audible about getting those back up. If you want to see movement on that quicker then the best thing to do would be to bug Audible about it directly and see if you can't bump me higher up the priority list.
Existentially Challenged is now available from Audible.com. You can click here to get it or on the image above if you couldn't wait this long.